7 Reasons Why Your Kid Should Learn Java 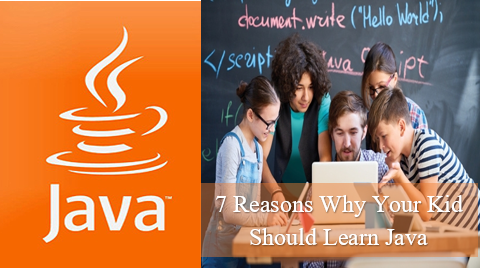 In the technology world, knowing how to code is one of the best assets you can have. You hold the power to code any idea that you have. But what coding language is really the most ideal to learn for your child? There really is not an answer, but some languages are more fit for kids than others. Java is one of the best languages for kids to learn. Java is in very high demand, has very few limitations, and Java developers make lots of money. Java also has community support, is beginner-friendly, has staying power, and give you a competitive advantage.

Java is in high demand by big tech companies

According to recent studies from 2016-2019, Java is the number one most used coding language outnumbering C and even python. Although Python is the most used language as of 2020, Java is a very close second. Android also uses Java as its base language for its developer jobs, which rank in the Top 10. By allowing kids to learn Java at a young age, they retain the information for longer and allow themselves to be eligible for more jobs.

Java allows you to expand your creativity to the fullest

Java is known for its flexibility, security, and convenience to work on any operating system. Java is used by many companies in tech, government, finance, healthcare, insurance, and many more. These companies include Amazon, Facebook, LinkedIn, and Google. Java runs on more than 3 billion devices throughout the world, the most out of all coding languages. Java is also used greatly for various purposes including technology, commerce websites, financial trading platforms, Gmail, and even or the Curiosity rover on Mars. It is beneficial for your kid to learn java so they can express their creativity in coding with such a diverse language.

Java allows developer to make a large sum of money

Entry-level java programmers make $50,000-$100,000 per year. As they gain experience for a few years, Java programmers can make anywhere from $60,000 to $120,000 annually. These salaries are a few thousand dollars higher than other coding language salaries. The earlier your kid starts learning java, the more it will help them in the future to get a high paying salary.

Java has a large, supportive community

While Java already has 9 million users and is the most searched language, it also has very helpful sites. Stack Overflow is a site where you can ask questions and get answers when you get stuck. On the site, the word ‘java’ is tagged over a million times. This can be helpful for kids for when they are stuck and do no have any help at home. GitHub is a site where you can look at code repositories. There are over a million with 68,000 active java coders. By having the opportunity to look at other code, kids can get inspired and widen their knowledge of the java language.

Java has staying power and is known as a core language

Even though it is tempting to make sure your child learns the most tech savvy and newest coding languages, it is more beneficial to learn a language with a solid foundation. Languages that are new are more likely to become outdated and of no use. By learning older languages that are widely used like Java, it is then easier to learn other languages that may be more complex or new. Both the AP and IB programs, and many colleges, teach and test in Java as well. Java is used in schools because of its versatility and doors it will open for your child in the future.

Originally, Java evolved from the coding languages C and C++. While Java has similar functions and methods, it is much easier to learn and is more user-friendly. Java automatically manages memory and pointers, so users do not have to. Java is also object oriented, meaning you code and control objects which model the system, making the coding process much easier to understand for kids and allows them to modify existing code easier.

Ray Kurzweil says, “The only second language you should really worry about your kids learning is programming."

Sign up for Java Lessons with Techno Smart Kids

According to recent coding camp research, 12% of coding bootcamps teach Java because of how much our industry uses Java. Knowing Java will also help your child be distinguished from other coders for programming jobs. When comparing non-Java CS university degree students and Java bootcamp students, there is one significant difference. Java bootcamp teaches kids more day-to-day used skills than universities. When having a CS job, employees value the work you can do at office over the credentials and degrees you have.

If your child is interested in Java, make sure to sign them up for a few camps to help them get started. Here s Techno Smart Kids, we offer beginner, intermediate and expert Java classes. Check here for options to learn Java this summer. Contact us for private lessons.

What Parents Say About Us

When we are highly invested in Child’s success, beautiful things happen.Here is what they have to say about us –

My son has been really enjoying TechnoClub at Creekside. Really appreciate Munira’s extra effort on helping my son catch up with his missed classes. He is surely joining level 2! Thanks for bringing this club to Creekside

My daughter, who is in 4th grader attended Technoclub for all three quarters last year and we are so impressed and please with her new computer skills. Some of the features she learned in Excel and PowerPoint were new to me too. Great Club. Thanks.

My both kids enjoy the robotics class a lot, where they can be creative and problem solvers. The teacher is very nice, patient and very helpful.

My son enjoyed the Techno Club classes very much. I can’t keep him off the computers. I am glad he is using the computers to create art instead of just playing games. Thank You

Very impressed with the program . My daughter really enjoys the Python programming class

Markus gives this class two thumbs up. Thanks for sending us all his work. It was very impressive.

I can’t believe my 6 yrs. old daughter created all those wonderful artworks in Paint. Great Program

My three boys have taken classes with Techno Smart Kids for a few years now. They have enjoyed learning computer skills, scratch and python so far. The teachers make learning these skills fun and engaging. They look forward to learning each week. The Saturday classes have been great for the small classes and the teacher is wonderful. The classes at the elementary school are great as well. I would highly recommend the classes through techno smart kids!

My daughter didn’t really want to learn scratch in the beginning but Ms. Munira made the class so fun and inviting. She now begs me to sign up for all future lessons. This has given her a glimpse into what coding entails and how fun it is to watch your own creativity come to life. Thank you for teaching our daughter and having her fall in love with learning Scratch!

I absolutely love this program. More importantly my eight year old daughter does as well. The teachers are fantastic. I've notice positive results from my daughter, not limited to focus and overall computer literacy. Highly recommend these programs.

Easy, Fun & Brilliant. Keeps the children busy yet make productive use of their time.

My child loved the program. It was in his after school program. The scratch teacher was awesome, was always very encouraging and happy to help extra after class time. There was never a rush with learning and he was always open for suggestions from parents. This has build curiosity for learning further in my child for scratch coding and python. Thank you TSK!!!

My son was enrolled in scratch programming by techno smart kids thru his ymca enrichment program. This is an excellent program for kids who want to learn coding and/or want to get better at it. Excellent engagement by teachers. The projects made by my son were very impressive and he was super proud of creating them. Highly recommend this class.

Both my boys took after school Python and Robotic classes for 2 semesters and they were happy and learnt a lot. Instructors were knowledgeable and friendly. Boys always looked forward to attend these tech classes every week.

I was looking for a tutor to teach computer science for my ninth grader and found out about Techno Smart through a Facebook post. Munira was very helpful from the very beginning and she connected me to Hussain for online classes. He is a great teacher and my daughter felt very comfortable with his teaching style. He connects to his students very well. I feel he has a good balance on how to support his students and challenge them at the same time. We are really happy with our association with Techno Smart.

My son takes Python classes here. He has taken Scratch classes as well. Instructors are knowledgeable and he enjoys learning computer skills.